Yoshimitsu Yamada was born on 17 February 1938 in Tokyo. His father, Ichiro, was an academic professor, and his mother, Michio, took care of his home. The father’s family was related to Abe family and, when as a child Ichiro lost his parents, he was adopted by them.

The difficult situation of Japan during the II World War forced both families to emigrate to Korea during the forties, where they settled in Chinju, a small town, about 200 miles from Seoul. The Abe family head, Kazo, leased land there and run his own business, Ichiro Yamada went into mining business. They stayed in Korea until the end of war.

Ichiro Yamada’s cousin Tadashi Abe, had been practicing aikido since 1942. This coincidence undoubtedly affected the later life of Yoshimitsu. A just several years old Yoshimitsu has had contact with O-Sensei for the first time even before the trip to Korea during a martial arts presentation in Abe family home. This meeting made an unforgettable impression on him. He reminiscences, as if it were today: a nice, calm, elderly man O-Sensei seemed to be at first glance, become someone completely different on the mat – an uncatchable and mysterious master of martial arts. 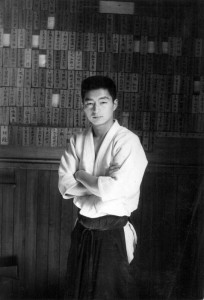 This meeting probably had influenced the decision of an eighteen year old Yoshimitsu, who in 1955 decided to join the Hombu Dojo as an ushi-deshi. This was thanks to a recommendation of Tadashi Abe, as the young adept has never before trained martial arts. His first day as an uchi-deshi was at the same time his first day on the mat. He immediately made friends with sempai Nabuyoshi Tamura and Sadateru Arikawa.

Hombu Dojo was at that time a completely different place as it is nowadays. House of family Ueshiba belonged to the dojo, and Morihei himself quite often, although irregularly, appeared on the mat. O’Sensei presented unequalled authority for all the uchi-deshi. With his demeanor he impersonated all the qualities a young Japanese used to strive for at the time.

The trainings were demanding and at life the dojo almost ascetic in nature. This was related with the difficult economic situation in the country after II World War. Hombu Dojo did not especially stand out from the general life level in Japan. The building was not heated, so in winter the temperature dropped below zero degrees, in summer the heat used to strike. Deshi did not have their own quarters or too many personal items, their life was subject to the rhythm of dojo’s life, and any private moments were very rare. Each of the uchi-deshi had to perform certain tasks and take active part in private lessons. Yoshimitsu Yamada remembers the schedule from that time even today. The first training, conducted by Kisshomaru Ueshiba, started at 6:30, another one, at 8:00, was run by Koichi Tohei or Kisaburo Osawa, whom once in a week were replaced by Kenji Tomiki. Hiroshi Tada or Seigo Yamaguchi conducted classes at 15:00, and trainings at 16:00 and 18:30 were run by various teachers. Koichi Tohei was an idol to many trainees – that impressed with his character and technical skills. Many uchi-deshi regreted that more and more he involve himself in running a school in Hawaii and that he visited Tokyo rarely. With time, the group of students grew – Yasuo Kabayashi, Kazuo Chiba, Mitsunari Kanai and Seichi Sugano joined, and along with Yoshimitsu became a tight group of friends.

Despite incredible involvement in trainings and dojo’s life, each of them silently dreamt of leaving Japan, which, after the period of American occupation, opened to the world. Yoshimitsu Yamada, as a delegate of Hombu Dojo, taught aikido at American military bases. He honed his English language skills and encountered culture and traditions, which fascinated him. He wanted to go to USA. 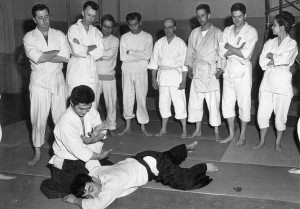 An opportunity came along at the beginning of the sixties. The initiative of a group of American enthusiasts interested in aikido was the pretext. Eddie Hagihara from New York, whom Yoshimitsu met personally in Japan, contacted Hombu Dojo. In 1964 Aikido Headquarter was asked to present an aikido show for the World Fairs in New York City. Preliminarily, Dojo was to be represented by Koichi Tohei, however due to an injury the plans had to be changed and Yoshimitsu Yamada was sent. Snatching the opportunity he met with his American friends and agreed to take care of the New York Aikikai school. However, his fate could have been completely different – at that time Tadashi Abe has already been in France, and Yoshimitsu pretended to his succession. However, his friend and sempai, Nabuyoshi Tamura, who still is the main persons of European aikido, beat him to it. Yoshimitsu Yamada was delegated to the Eastern Seaside of the United States. He chose New York for his headquarters.

The beginnings are always difficult, but what the young aikido teacher faced in New York required enormous self-commitment, patience and effort. The New York group was not well-organized, nobody had experience in running aikido school and Yoshimitsu had to do everything from a scratch, starting with organizational issues, to teaching the proper techniques. The lack of financial means did not make the situation easier. Along with the first New York uchi-deshi Angel Tineo-Avarez, they lived and slept in a changing room, as they could only dream of renting a flat. All the money went to the maintenance of the school, and the perspectives were not promising.

Aikido was not very well-known on the Eastern Seaside of the USA, and the possibility of promoting this martial art with the use of traditional methods were strongly limited due to financial reasons – advertisements in the media was too costly. The only means of presentation were public presentations. Fortunately, thanks to kindness of other martial arts schools, the opportunities of public demonstrations were in abundance, e.g. during karate championships. That is why lots of pupils come from others martial art dojos, and wanted to test themselves on new grounds. These first years were a significant challenge for Yoshimitsu, however he was supported very strongly by the students, who were involved in the dojo matters, among others: Mike Abrams, Harvey Konigsberg, Harry McCormack. On average about 50 persons trained in the dojo in the sixties. 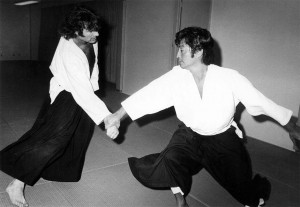 The main instructor of NY Aikikai did not have much luck. The cultural exchange visa card that he possessed did not guarantee him a stay in the USA for a longer period, which threatened with deportation back to Japan. New problems arose along with the birth of his children. The two, who were born in the United States, were given American citizenship and could remain in the country. Yoshimitsu himself, his wife and the first daughter, born in Japan, could not. Trying to protect his family from the soulless emigration law they made a difficult decision: the wife would return to the homeland with children. The separation with the closest ones in that period is the thing that Sensei Yamada regrets very much to this day.

Slowly aikido became appealing to people not only in New York, but also throughout the whole Eastern Seaside. This was above all thanks to incredible involvement of Sensei Yamada. He travelled so much – to Boston, Southern New Jersey, Pennsylvania and Canada – that his students started complaining that he was not in NYC at all. However, as he was the only person with proper experience, he had to take care of everything himself. Actions of Yoshimitsu Yamada were intentional – work at the foundations in time resulted in numerous great teachers, who run their own schools to this day.

Such great involvement in the realization of a mission, he was sent with to the USA, began producing effects. When the situation of the NY dojo became stable, aikido more popular, and the individual dojo were operating effectively, came the time to establish an organization, in order to formalize and specify the cooperation at an administrative level. So in 1968 the United States Aikido Federation (USAF) was created. This was the result of cooperation between the teachers delegated by Hombu Dojo to the USA. It is the largest such organization in Northern America.

The visa problems ended in 1972. Sensei Yamada started using intensively his acquired freedom in travelling reaching out to the need of promoting aikido outside the United States. One of the first foreign trips was on Sensei Tamura’s invitation to France in 1973.

The eighties are a period of relative stabilization. Two decades after the establishment of dojo in USA, in 1984 there was a big summer camp, with aikido Doshu Kisshomaru Ueshiba. This proof of appreciation was an incentive towards more effortful work. Sesnei travelled more and more, and in 1992 he invited to cooperation Seichi Sugano Sensei. His friend from the Hombu Dojo times joined New York Aikikai, giving the school a unique rank. The New York dojo is the only school in the world, in which two direct students of O-Sensei teach simultaneously.

Sensei Yamada reminisces that only after 20 years he began seeing the results of his work. The first 10 years he devoted to the New York school, and the next 10 years to the development of aikido in the Eastern Seaside. He claims that thanks to the difficulties and problems he encountered in his way, he became more mature. Being fifty years old he even started accepting the fact that people call him “Sensei”. Earlier he used to ask himself the question: “have I earned the right for people to call me that?”. 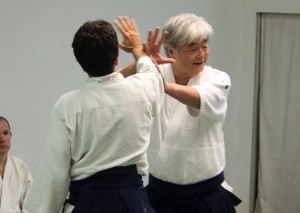 Yoshimitsu Yamada spent at Hombu Dojo about seven years. Since that time the set of the taught techniques has been subjected to significant changes, and aikido itself is a slightly different martial art that the one the first uchi-deshi of Morihei Ueshiba were taught. Despite this evolution, Sensei Yamada tries to pass on the things he had learned in that time. Orthodox in teaching, he teach the basic techniques, which he tries not to modify. He believes that solid foundations are necessary for proper development. He is an enthusiast of intensive training as the means for both physical and spiritual development. He does not oppose hard trainings, according to budo spirit, however he does not excuse brutality or stupidity on the mat. He still travels intensively, visiting almost all the continents in the world. He is the Chairman of American Aikido Federation and the South American Aikido Federation. He is the author of several books and DVDs on aikido.

When asked about the things he is most proud of, Sensei Yamada list the following: his own dojo, the fact that he contributed to development of aikido in the world and that he helped many people in becoming great aikido teachers.

And dreams? Buy some land somewhere near New York and create a dojo like Iwama during its best years. Have several uchi-deshi, continue the trainings, form a little…