The Techniques of Aikido

Aikido is a relatively new Japanese martial art, created by one man Morihei Ueshiba (b. 1883 – 1969), known as O-Sensei (the Great Teacher). Aikido is the only purely defensive martial art. Aikido techniques uses circular rather than linear movements, with the defender moving out of the line of attack. Aikidoists learn to evade and redirect the power of the attack, resulting in the attacker being unbalanced and thrown or immobilized. Because of this principle of “non-resistance”, Aikido can be effectively performed even against larger and stronger opponents. From this aspect it can end an attack suddenly, severely, and decisively or dissipate it with the gentleness of a soft breeze. But Aikido is something more than only an effective self-defense system. To understand these ideas and principles it is necessary and essential to know something about Morihei Ueshiba O-Sensei life and work. 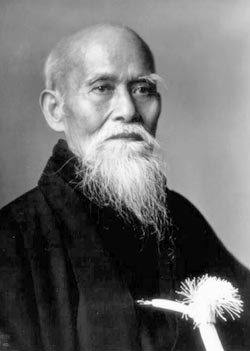 From an early age Morihei Ueshiba studied different traditional Martial Arts, known as bu-jutsu. He became a master of several styles of ju-jutsu, sword arts (kenjutsu), and spear combat (sojutsu). The most significant influence on his technique was his meeting with Takeda Sokaku, grandmaster of Daito-ryu Aiki-jutsu. Despite his achievements in these arts he felt that something essential was lacking. Morihei’s quest was always primarily spiritual rather than martial, and although he gained much from Sokaku, he was still searching for something deeper than expert technique and devastating power. It was evident to O-Sensei that today’s victory woluld be defeated tomorrow, that the strong man will ultimately meet someone stronger and that pursuit of brute force must end in frustration. O-Sensei understood that the most formidable opponent was himself and the real battle of life is to overcome the qualities of pettiness, ambition, and selfishness. Morihei Ueshiba discovered that the spiritual potential of the martial arts, the real purpose of the Budo – Martial Way, is to purge one’s character of these undesirable traits and obtain control of one’s body and mind. O-Sensei combined all that he had learned from others martial arts with his vision of the inner meaning and purpose of Budo. Over the years, Morihei Ueshiba gradually modified the originals mortal techniques and added others. The result of these concepts is Aikido – martial art without martial techniques.

O-Sensei’s most outstanding characteristic was his modesty. He frequently said that he was only a student of Aikido, practicing diligently in order to open the way for the others. Yamada Sensei sais, in remembering O-Sensei:

Since for him Aikido was a Way of life, there can be no end to one’s apprenticeship. This is something that all of us who practice Aikido should always keep in mind.